The Charms of Old-School Charting 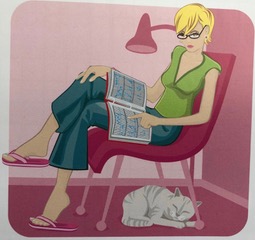 I’m obsessed with food, cats, and podcasts. Actually, come to think of it, I’m obsessed with a zillion things. But recently, while walking around my lake listening to a podcast, I was fascinated by a young woman who was convinced that she was starting to have seizures when she read. But her doctors didn’t think that was possible. Sure enough, she found a neurologist who trusted her instinct and tested her hypothesis. So while wired up, she started reading, and bingo, she would have a seizure.

Her story got me thinking about how important it is for women to listen to their bodies and follow their gut, even when others may doubt their experience. It’s always exciting when I hear from women who chart their cycles and tell me that they have discovered all sorts of interesting symptoms that occur only at certain times in their cycles. With charts in hand, they can take the evidence to their doctors to prove that it’s not “all in their head.”

As for myself, I started charting my cycles in the (gasp) early 1980s at the age of 27, continuing for 31 years! I recorded everything on paper (I happen to think that notebooks filled with fascinating charts are so much cooler than apps, but that’s just me, and maybe hundreds of thousands of other charting fanatics). At any rate, in the end, I had accumulated a total of 378 charts 8 inches tall filling five notebooks. One of the great things about charting is that every documented cycle can form a small chapter in your life-long journey as a healthy, empowered and remarkably self-aware woman.